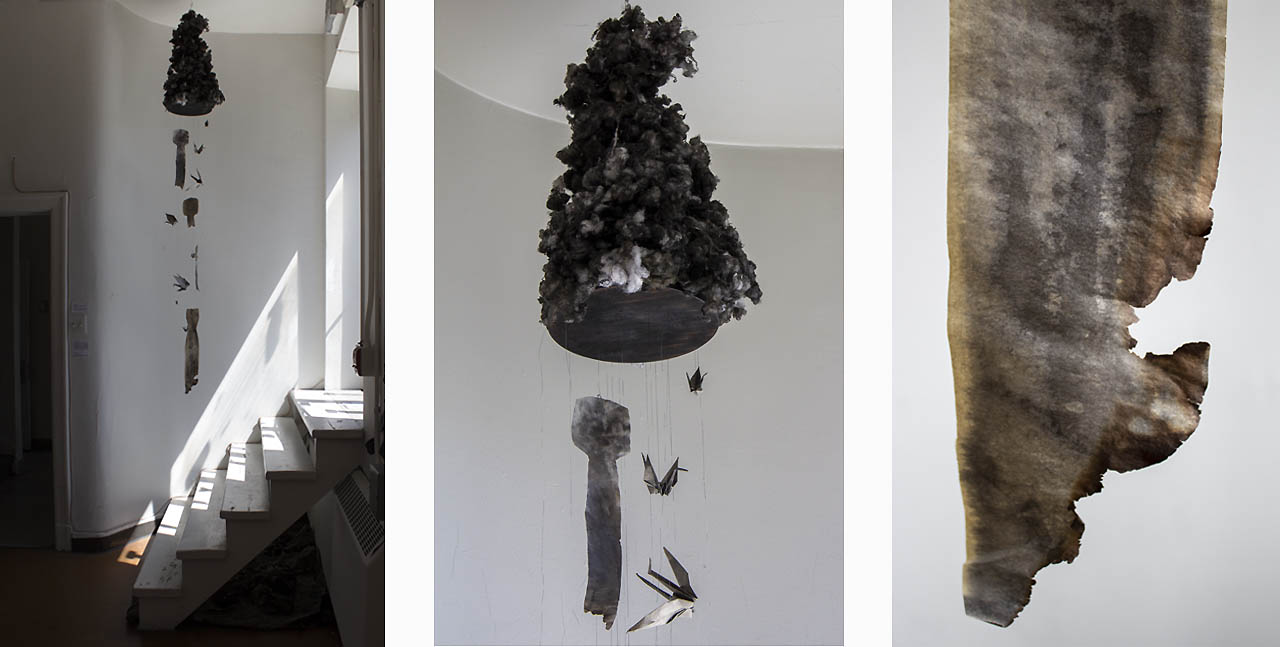 This work expresses the burden of the memory related to traumatic and emotional experiences with nuclear accidents and interventions. It represents the duty of memory as well as the risks of oblivion. 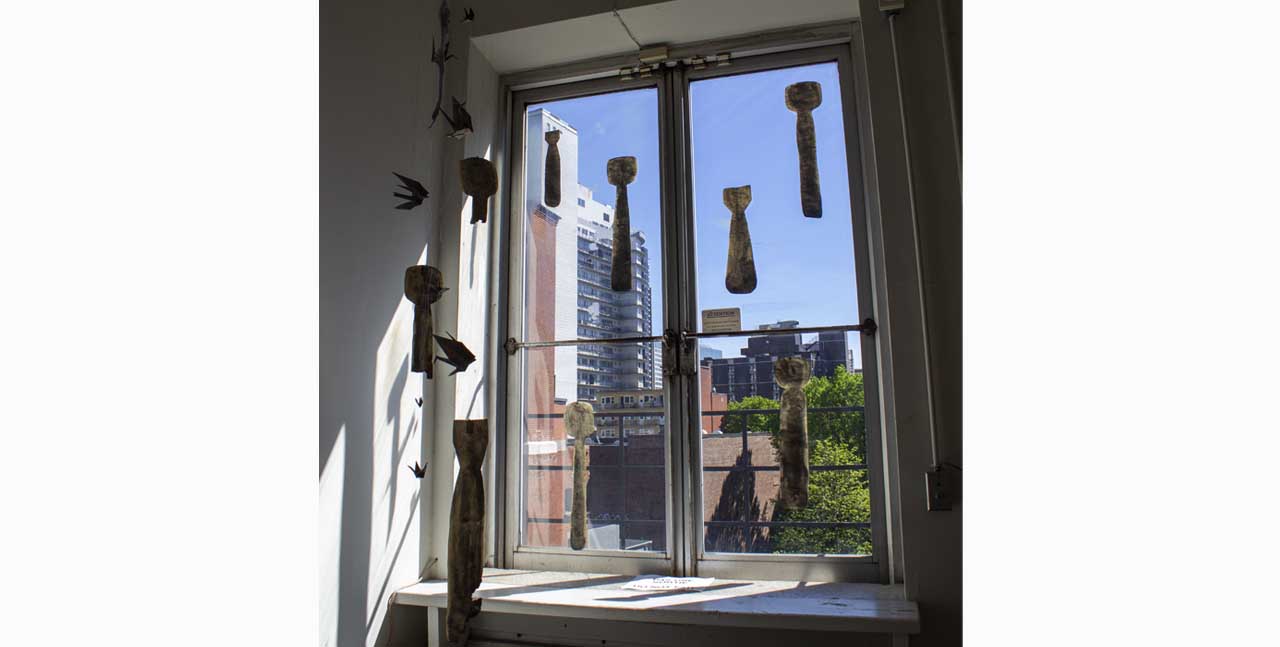 This work shows the victims of the catastrophes of the March 2011 Japan’s triple disaster (Earthquake, Tsunami, and nuclear reactor meltdown). By evoking the "shadows" of Kokeshi which is a local toy of Tohoku Region (the North-Eastern parts of Japan), I depict the departed spirits of the people who passed away by these catastrophes. Resembling the shape of a bomb, the shadow of kokeshi is also there to remember the victims of nuclear disasters. 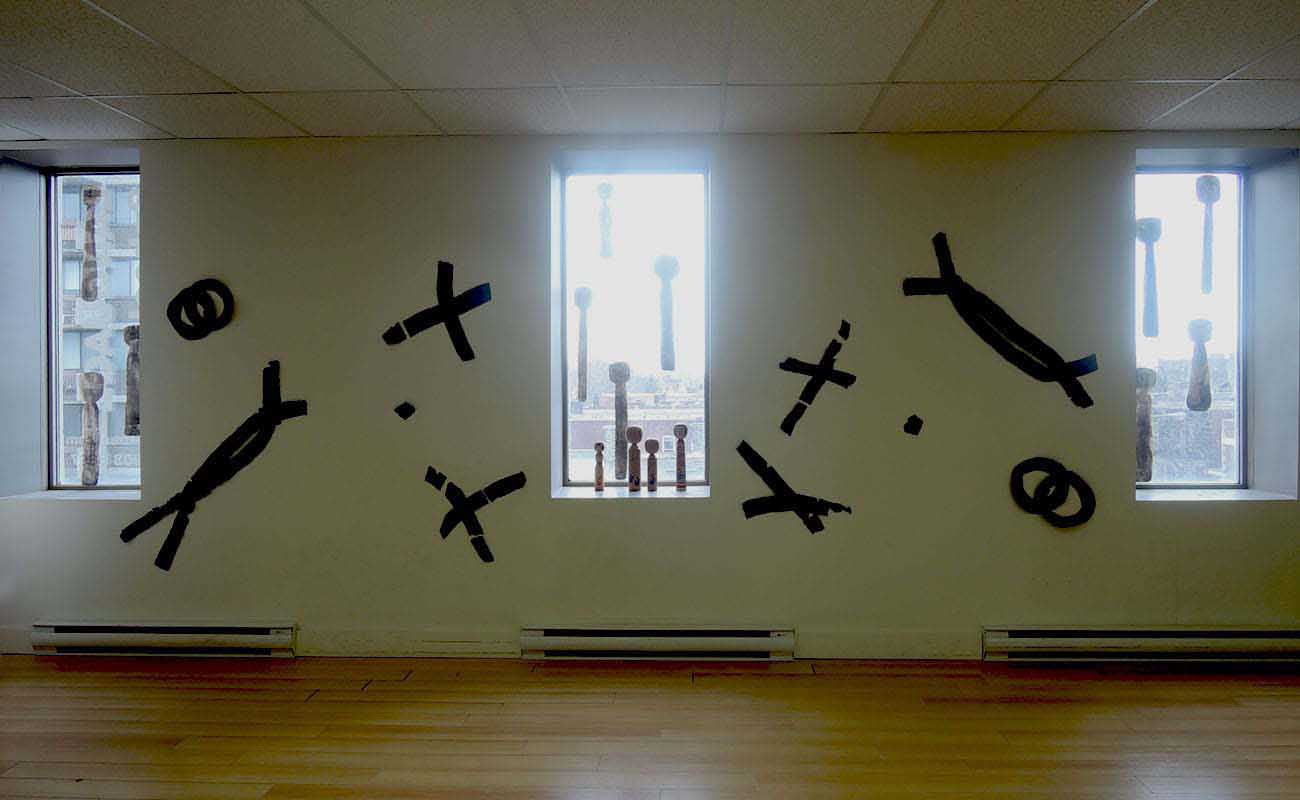 Five years since the March 2011 Japan's triple disaster, the problem of radioactive contamination had cast dark "shadows" on Japan. The exhibition "Shadows of Crisis" represented the various issues relating to the nuclear crisis of the past, the present, and the future. It offered an opportunity to think about important social complications resulting from the atomic power. It is now more than ever crucial to acknowledge the "shadows" provoked by this crisis.

Kokeshi is a local toy of Tohoku Region (the North-Eastern parts of Japan). In this case, it expresses the victims of the March 2011 Japan's triple disaster. The "shadows" of kokeshi evoke the departed spirits of the people who passed away by these catastrophes. Kokeshi and "shadows" represent the body and the soul. The divided "shadows" also suggest the states of mind of the individuals and the communities. 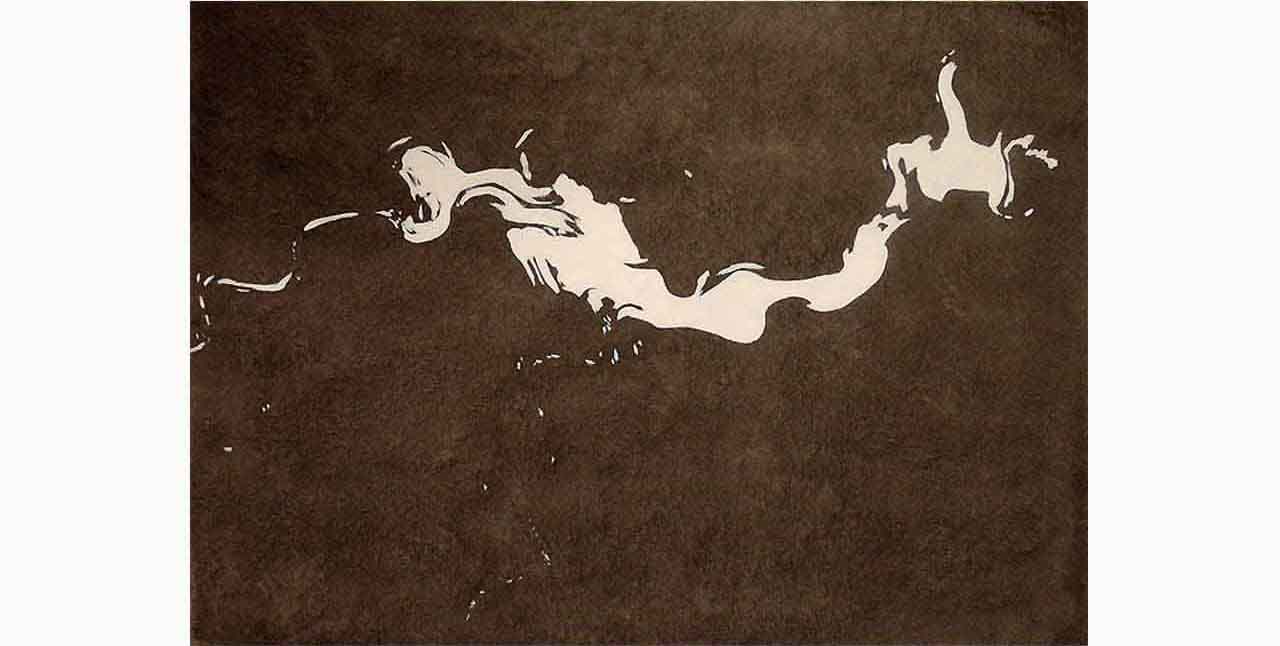 This work is my impression of the current state of Japan regarding nuclear issues. A specter is something widely feared as a possible unpleasant or dangerous occurrence. As such, the specter of Japan stresses the political and the national ambiguous responsibility behind the radioactive contamination, as it is reaching the whole country of Japan and beyond. 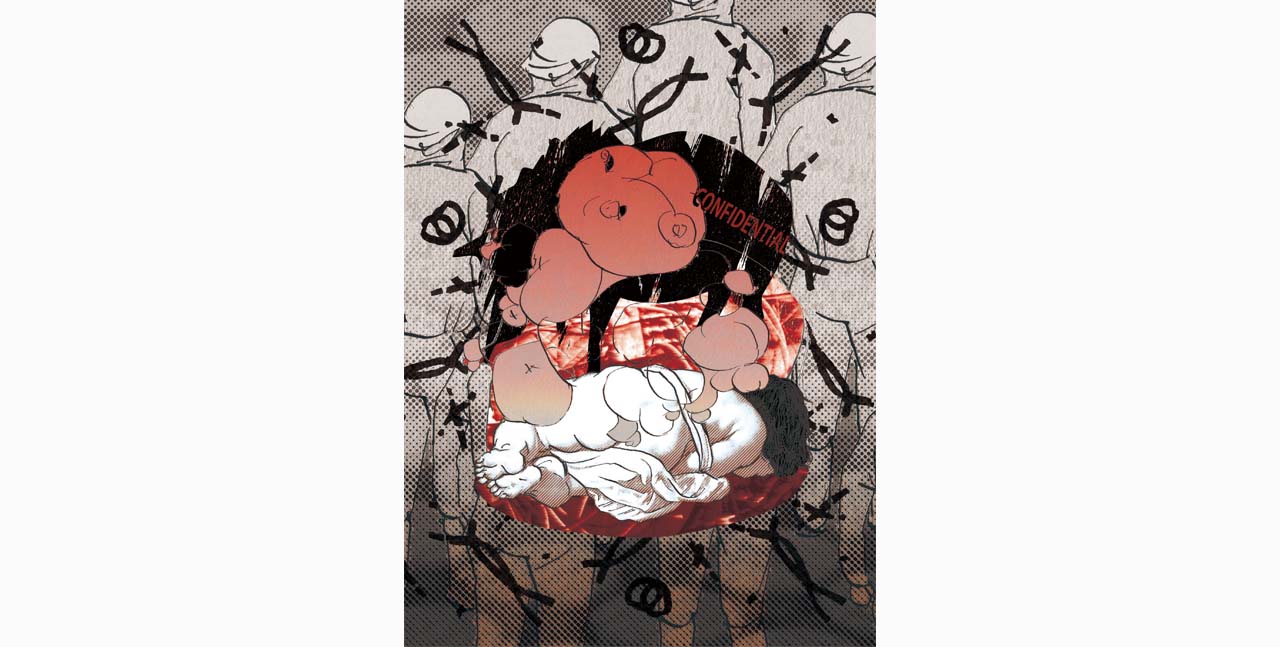 This work conflates many elements that I considered significant in the nuclear culture, from health and body issues to socio-political consequences of nuclear energy. It comprises the Trinity gadget, nuclear waste (in tanks), nuclear plant workers, as well as chromosomal abnormalities, contaminated tomatoes, inobuta (a domestic pig and wild boar hybrid from Fukushima), and a reference to Rubens’ Massacre of the Innocents. This work was made for The Nuclear Culture Source Book (Ele Carpenter, ed. Black Dog Publishing, London, UK, 2016, p. 107). 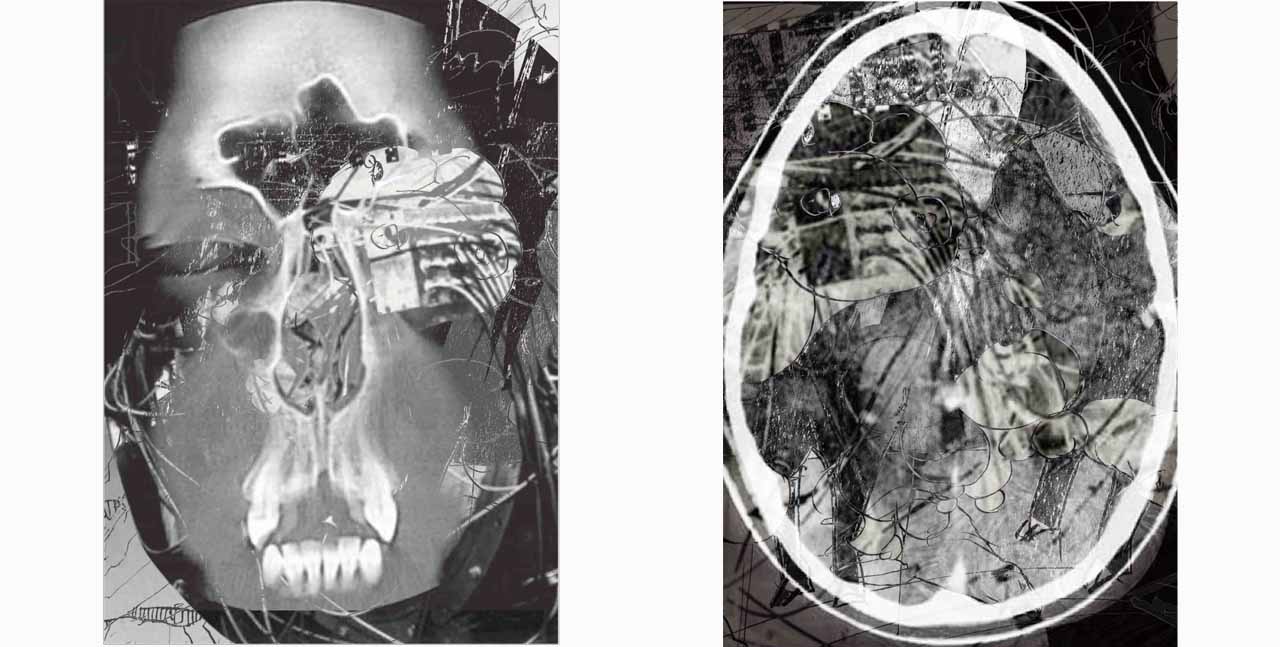 The Anatomy series deals with nuclear issues from an international and humanist perspective focusing on the consequences of nuclear power plant disasters. With these works, I hope to give insights to nuclear power plant problems, such as war or the rationalization of the nuclear. 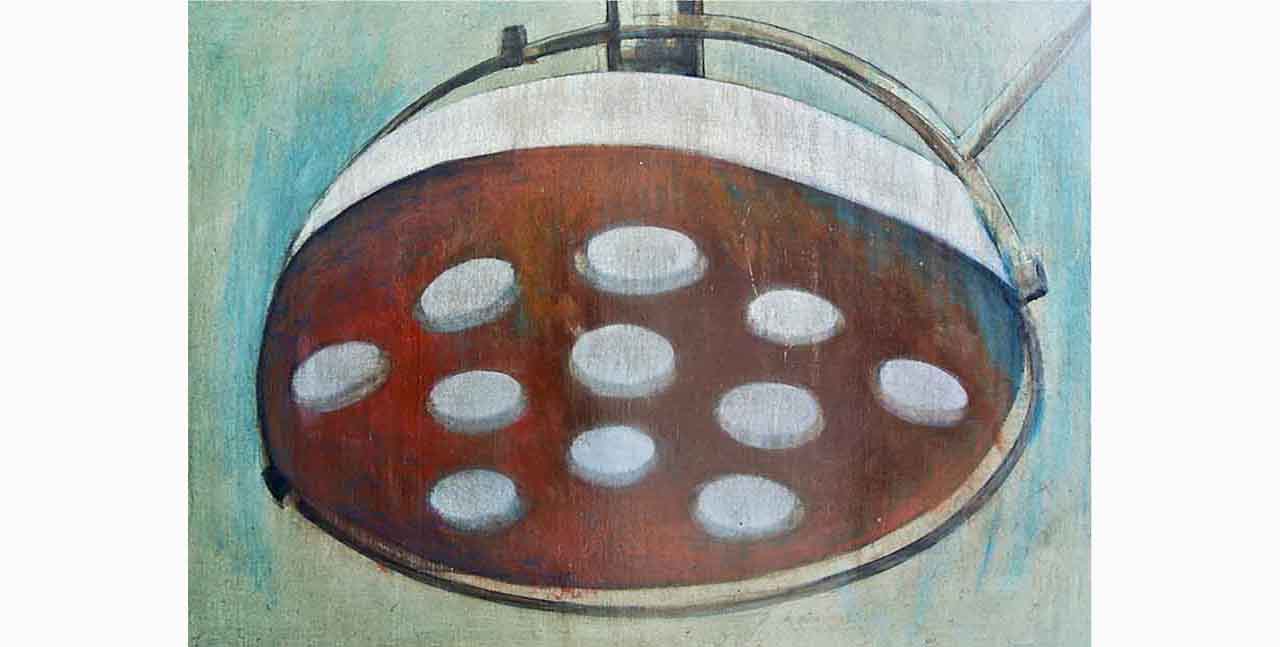 Strain of the Surgical Light

This work is part of a series of fifteen paintings which I showed in a solo exhibition at a former pediatric clinic which is now as a registered tangible cultural property in Japan. The exhibition concept underwriting the whole series was linked to the challenge of representing intangible or invisible phenomena. I thus attempted in these works to create images that visualized emotions. Memories of past emotions were drawn so as to actualize the moment when the imagination reenvisions them. In the gap where people’s memories became hazy, I wanted to portray a certain type of affective atmosphere or zeitgeist. 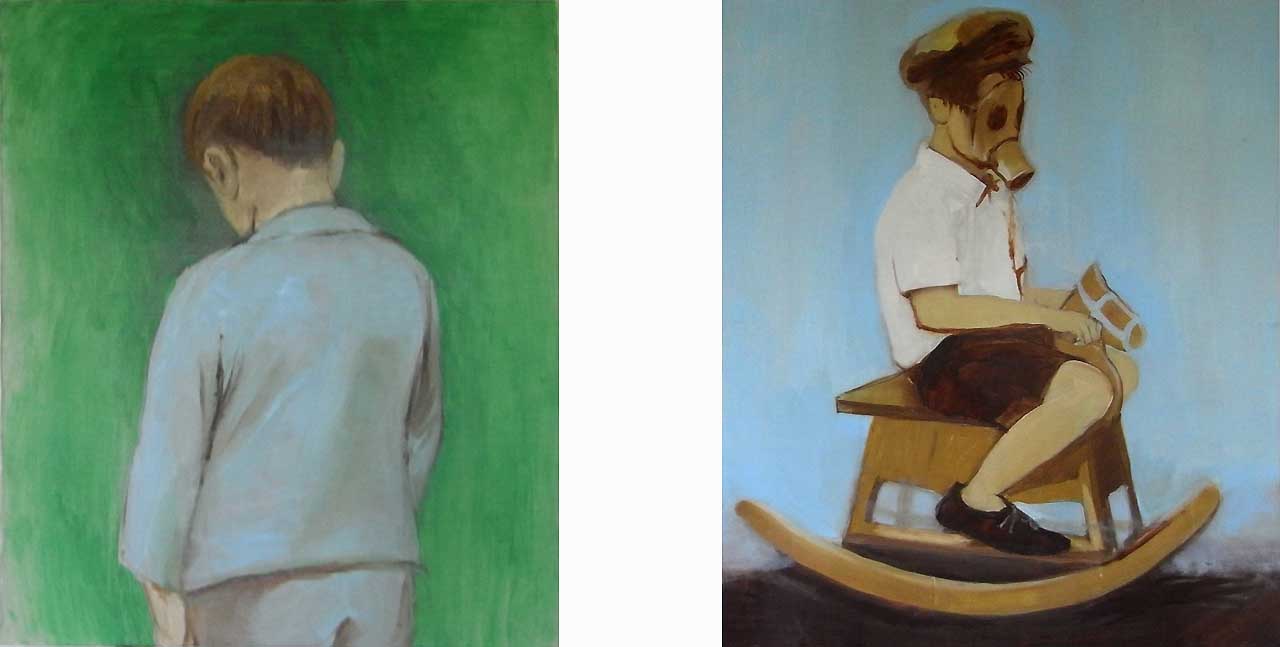 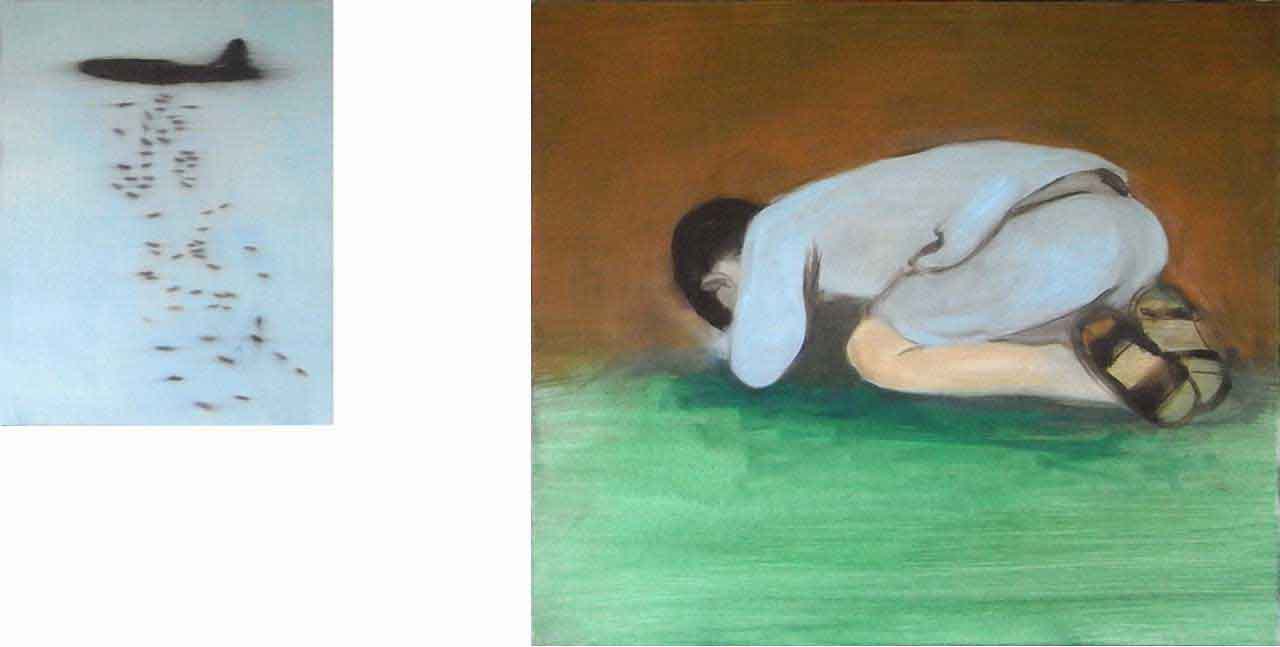 After I was becoming interested in considering postwar Japan’s social issues and political problems in my art, I created this War series painted from the viewpoint of a recent resurgence of militarism and warlike discourses in Japan. I attempted to highlight the casualties of WW2/the Asia-Pacific War and Japan’s 1945 defeat and capitulation after the atomic bombing of Hiroshima and Nagasaki – aspects which tended to be increasingly forgotten by the Japanese public. I wanted to explore the causal relation (the relation of cause and effect) and the continuity between the past and the present, as it was more than ever necessary to look back upon what happened in past wars in order not to repeat the same mistakes.

Existence of the Goldfish

The goldfish is the icon of Yamatokōriyama area, as well as one of its main industries determining its landscape. The goldfish represents money, while many varieties have been created by human greed. I reused discarded paddles for scooping goldfish. I employed these paddles as frames in which I printed drawings of goldfish and the images from Japanese bills. Through these repurposed artworks, I tried to express the symbolic link between goldfish and human activity. 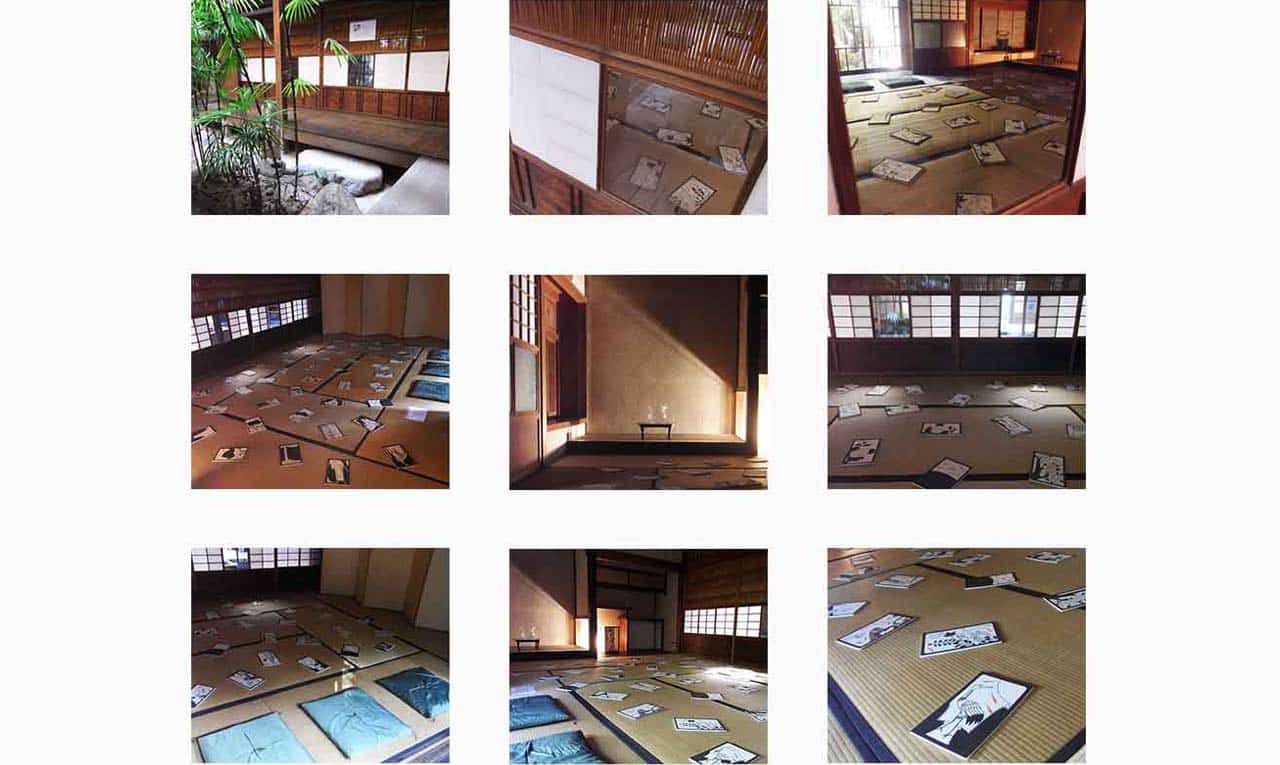 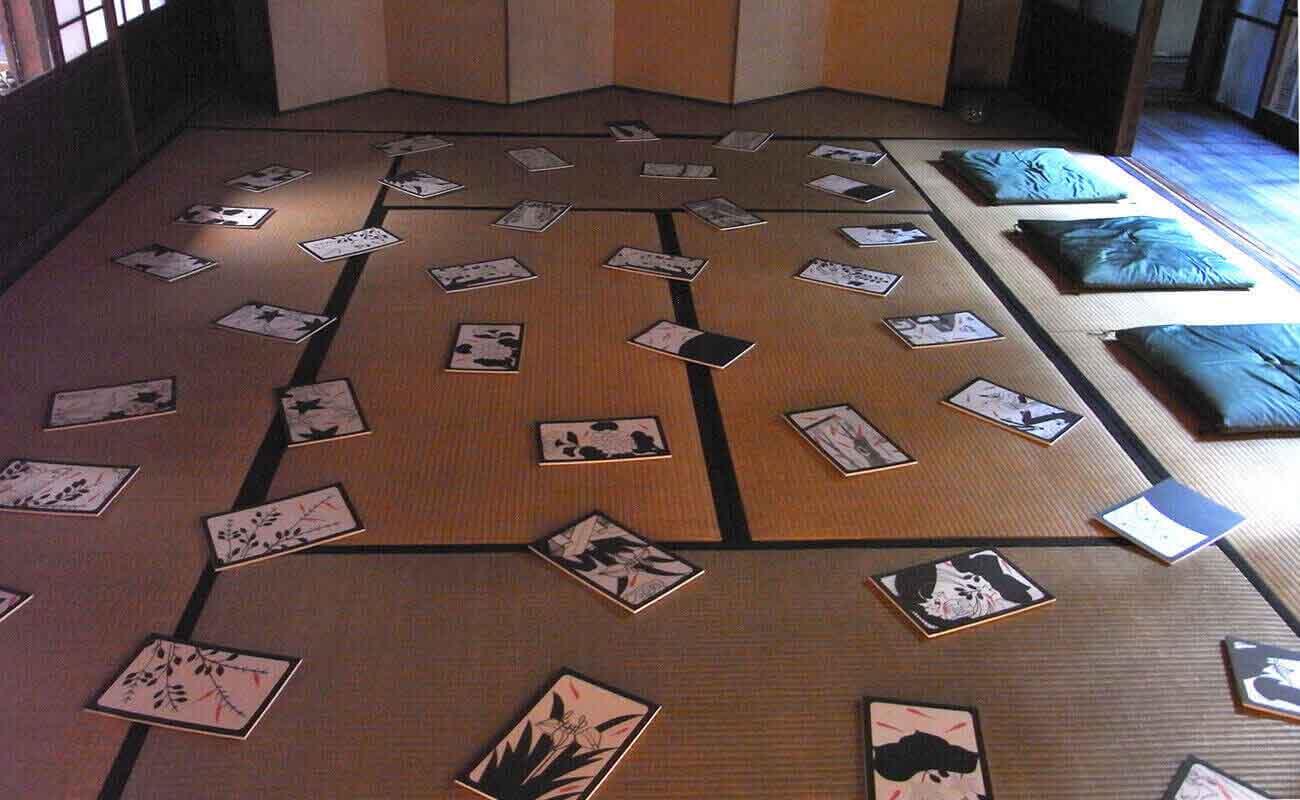 Hanafuda de Goldfish was a site-specific work exhibited in the room of a former red-light district in Yamatokōriyama, Nara, Japan. It showed 48 cards of the Japanese traditional Hanafuda game in a place renowned for goldfish (which symbolized the courtesans at the time). Through the red-colored goldfish drifting and flowing on Hanafuda, I wanted to show a forgotten or hidden past of this traditional Japanese neighborhood. The Japanese card game Hanafuda was based on the design pattern of a flower for each of the twelve months, and it was associated with gambling and houses of pleasure. The printed cards represented the Japanese concept of honne-tatemae, that was the true ideas and motives behind the public facade since the controversial image of the red-light district of the past has been replaced by the more accepted image of goldfish (which now symbolizes money and prosperity). With these 48 pictures, I tried to show not only the facade but also the hidden history stretching behind the present appearance of the show-room.